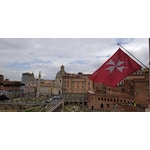 The Sovereign Military Hospitaller Order of St. John of Jerusalem of Rhodes and of Malta – founded 970 years ago – is a Catholic ...

Temporary · 30–40 hrs/month · Starting from 1 Sept 2022 For around 12 months
New York City, New York, United States
internshipjob
The organiser has marked this opportunity as filled. Applications are closed. You can find other volunteering opportunities here.

Permanent Observer Mission of the Sovereign Order of Malta to the United Nations
#55423
Scan me or visit www.orderofmaltavision2050.com/o/Permanent-Observer-Mission-of-the-Sovereign-Order-of-Malta-to-the-United-Nations/opportunities/Diplomatic-Trainee-with-a-specialization-in-the-eradication-of-human-trafficking/55423 to join

Diplomatic Trainee with a specialization in the eradication of human trafficking.

The Sovereign Order of Malta is a Roman Catholic sovereign state, with its government located in Rome, Italy. It is also a Catholic religious order and, while is no longer governing specific territory, it does provide a comprehensive range of humanitarian and health care services in over 120 countries and maintains diplomatic relations with 112 nations, including enjoying Permanent Observer status at the UN in Geneva and New York. The Order was established in Jerusalem over 900 years ago and is acknowledged as the oldest on-going humanitarian organization in the world.

The Permanent Observer Mission at the United Nations in New York follows closely the activities and the priorities of the General Assembly, with a focus on humanitarian issues, particularly migration, refugee relief, global food and nutrition provision, the sustainable development goals, human trafficking, climate change, religious freedom and global conflict among others. We have a particular focus on the work of the Third Committee and that of the Security Council.

As a part of the Delegation team at the Malta Mission to the United Nations, the Human Trafficking (HT) Diplomatic Trainee role will be one that monitors all activities and events at the United Nations General Assembly involving all forms of human trafficking—sexual exploitation, labor exploitation, and organ harvesting---worldwide. In collaboration with the Permanent Observer of the Holy See, and other Member States, the intern is expected to develop relationships to advance the awareness of and to assist in actions being taken to eradicate all forms of human trafficking.

In the short term, the primary focus will be on the planning, organization and execution of an important follow up meeting during General Assembly General Debate in September 2022 on the results of a UN Human Trafficking Research Study Pilot, conducted under the auspices of the Mission, involving several US-based large healthcare systems and several internationally-based healthcare entities. A common “universal” protocol will be presented to the World Health Organization (WHO), to be considered for worldwide implementation as no such policy currently exists. Invitations will go out to both internal interested parties, i.e. Ambassadors of member states and embassies, Permanent Observer entities at the UN, along with external involved parties, i.e. all the healthcare entities involved in the study.

Long term, the Diplomatic Trainee will assist the Special Advisor to the Ambassador on Human Trafficking with the execution of any side events and/or speaking engagements; assist in scheduling external trainings with Global Strategic Operatives (GSO), and programming which includes, but is not limited to: events, hospitality, volunteer coordination, as well as logistical organization in respect of new safe houses for HT victims which are being created in the Boston area, and the overall work of the Order of Malta Mission to the United Nations, and the American Association of the Sovereign Order of Malta.

This internship is being operated within the context of the Mountbatten Program (mountbatten.org). Program benefits are as follows:

Air fare to and from New York is not included. That expense is the responsibility of the Trainee.

*The Kolping House accommodation is not available to other participants in the Mountbatten Program, as it is designed for young Catholic international visitors and has a high residency by other United Nations interns and trainees.

What we will provide to volunteers

The organiser has marked this opportunity as filled. Applications are closed. You can find other volunteering opportunities here.

The Sovereign Military Hospitaller Order of St. John of Jerusalem of Rhodes and of Malta – founded 970 years ago – is a Catholic religious lay order. As a a sovereign subject of international public law – whose government is in Rome – it is neutral, impartial and apolitical. Its mission is to be at the service of the poor, the sick, refugees and marginalized communities. The Order cares on a daily basis for the aged, the disabled, refugees, the homeless, the terminally ill, lepers, children and drug addicts in 120 countries around the world. Through its worldwide relief corps, Malteser International, it is also engaged in aiding victims of natural disasters, epidemics and armed conflicts. Its bilateral diplomatic relations with 112 countries provide strong support for the Order’s activities.

For the past 900 years, the Order has assisted these individuals regardless of race, origin or religion. The Order of Malta has been operating with this impartial perspective for over 900 years, caring for people of all beliefs and belonging to many different faiths.

The Order relies on the involvement of its 13,500 members, as well as approximately 80,000 trained volunteers and 42,000 employees, the majority of whom are medical personnel. The Order’s organisations worldwide (Grand Priories, National Associations, relief organisations and foundations) are responsible for carrying out its activities, both in its permanent institutions – such as hospitals, outpatient medical centres and old peoples’ homes – and with its socio-medical and humanitarian programmes.